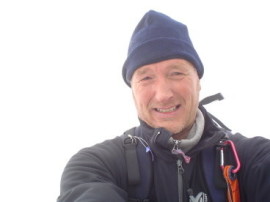 In fact, the Translyvanian ranges are mostly gentle green hills, big hills at that. Moldeveanu, nestled in the Fagaras range of the Translyvanian Carpathiansand the countries highest point, lies as a slightly bigger bump on a huge sweeping ridge, swoop after tiring swoop until you eventually get to Moldeveanu itself.

One notable fact of Moldeveanu is the fact that it lies a good distance from the road head and would require a good four days round trip from Brasov (unless you are a super man).

The climb is nothing more than a walk although the distance from the road head means you have to carry enough gear for the four days - although there are huts on route. Sharing the route with Romanian back-packers this can be a very satisfying climb.

This is probably best approached from Brasov in the west or Sibiu in the east. A train link between the two drops you at the tiny (nothing there) station not to far from the town of Victoria called Ucea de Jos. From here a bus (eventually) will take you to the town of Victoria. Vicotria is a pretty rough place but a good trail from here will take you to the Sambata monastry a few further miles up. Sleep here and begin the route the next day.

No permits and unfortunately no litter free zones. One aspect of this mountain area is the amount of litter dropped by backpackers - quite annoying. Clearly little or no education on environmental aspects.

The mountan can be climbed all year round but Romania has infamous deep freezes and like any mountain range tread carefully if plastered with snow. The mountains can be a long way from anywhere if you encounter an emergency. Summer are good months but sudden rain, thunder and lightning and hail can make going tough.

Being a wilderness area it is permissable to camp anywhere but of course - take in what you take out. A better (and cheap) option is to use the huts on route. Tiny cabins are available just near the monastry (Sambata Monastry), a hut is available below the main ridge on the red trail (Valea Sambetei Chalet - 1407m) on the east (Brasov) side and a hut is available on the blue trail on the west side of Moldeveanu (Podragu Chalet - 2136m).

Warning: the huts are okay but unheated, and only have miserable itchy blankets - not very pleasant if its been wet (especially on the blue trail) and generally stay cold. The beds on the red trail are individual beds but at the blue are large bunk style. Bring sleeping bags and warm clothing!

Warning No 2: For us western climbers the food served at these huts is pretty shocking. Tea is luke warm, just like everything else. They have the shocking practice of letting tea cool down before serving. But then your not in Kansas anymore.

The blue hut from a distance looks like a perfect Yorkshire cottage with roaring fire - except on close inspection theres no fire and not perfect.

The common route is to ascend from the monastry to the red trail and will take about four hours to the red hut. I stayed here and was quite glad because the next day is a tough push to the summit of Moldeveanu. The route ascends from above the Red Hut and is quite steep upto the main ridge. Here the route heads west over a series of swoops (many) before eventually the pull up to Moldeveanu which is north of the main ridge. A wind blowing east makes things tough.

Heading back to the ridge, more swoops head west where a sign will tell you it is four hours to the next hut. Three is plenty for most people and a sign will direct you off the ridge to the blue hut. The blue trail back down to Victoria is a long push and will take six hours or more on a sometimes intermittent trail. It seems little used but has plenty of deer about.

Like any mountain range the weather can turn from wonderful to nasty in seconds. A strong easterly wind makes the main ridge a tough walk. Storms seem to close in from the south and surround the peaks within seconds. Be prepared and you can end up at the miserable Blue hut like a drowned rat . 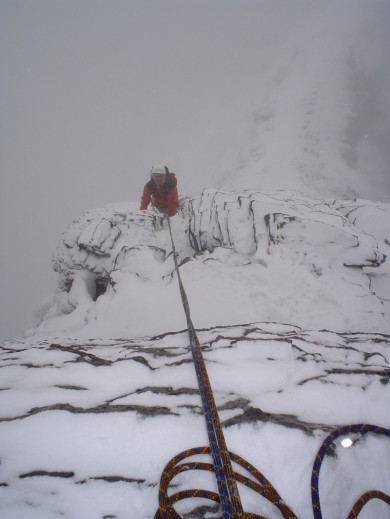